Problems when lighting an FID

Abstract “Why won’t my FID light or stay lit?”

This problem is much more common when using newer instruments that have an EPC (electronic pressure control) device because these utilize “smart software,” which tries to alert you of potential system problems.

Troubleshooting
To simplify the troubleshooting process, please answer the following question: Does the FID initially light and then goes out? If the FID initially lights, a distinctive popping sound will be heard every time the instrument attempts to light the flame. When it is lit, the baseline will usually exhibit a large sharp spike (over 100 pA) that accompanies the popping (Figure 1). If the FID does not light, then it may be the result of another set of problems. Another way to determine if a FID is lit without depending on output signals will be holding cool glass (like the bottom of a beaker or edge of a mirror) over the outlet of the FID. Water will condense on the glass if the FID is lit. 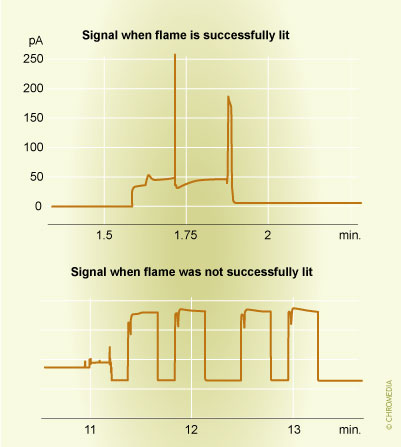 Top: the baseline will usually exhibit a large sharp spike. Bottom: the instrument will shut off the detector.

Did you ever try to explain separation to your employees or students? Well, try no more: Lee Polite did it for you in a way which is hard to beat. We will open up one example of his whiteboard class. Click this link to watch the video. To see more, you can register here. Students and teachers can access free for one month.

The links in the center column lead to hundreds of chapters with text, video presentations, visualisations and animations. The chapters on Analytical Chemistry 2.1 (David Harvey), as well as basics LC, GC (Harold McNair, Lee Polite and other experts) and spectroscopy chapters are on the level of colleges, laboratory schools and universities, all 'deeper' clicks lead you to more advanced knowledge on analytical techniques with all the details for in-depth understanding for professional users.
Chromedia is used globally by numerous colleges, universities and industries, our authors are ranked as the finest teachers in the world. So go ahead and discover Chromedia by getting a 30 days subscription, which is free for students and teachers. Chromedia functionalities work best on the Chrome browser.