Abstract This article was written by Pavel Jandera, together with Tuulia Hyötyläinen.

The optimization should be started with:

In the selection of columns, the mode of separation must be selected first. The choice is of course dependent on the type of the sample. 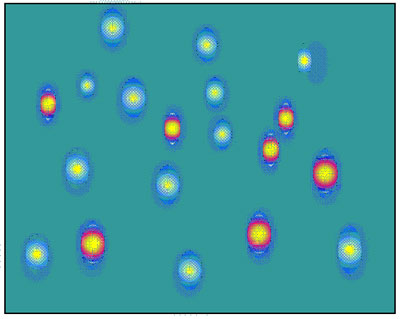 Next, the dimensions of the columns must be considered.

second dimensions is very important, because the whole stationary/mobile phase system controls the retention and the separation selectivity.

Of course, the mobile phases used in the two dimensions should be compatible.

In the first dimension separation, gradient

isocratic and do not cause problems in the evaluation of the 2D data.

The crucial step in the

development of a 2D LC×LC separation is the selection of the first- and second-dimension separation systems. (here comes a link to more information).

Various combinations of RP and NP, ion-exchange (IEC), or size-exclusion (SEC) LC modes can be utilized in LCxLC. Selected examples are shown in the tables. In these combinations, the separation is based on the differences in the molecular structure of separated compounds, such as size, polarity and shape, or the specific charge of ionic

compounds. The retention in ion-exchange systems is generally controlled by electrostatic ion-exchange interactions, but can be more or less affected by non-ionic interactions with the stationary phase matrix.

In practice, the separation selectivities in different systems can be more or less correlated, due to the mixed character of the stationary phase and mobile phase interactions. This must be taken into account when developing real world LC×LC separations.

Since the mobile phases used in RP×RP, IEC×RP, RP×SEC or NP×SEC systems are usually fully miscible and have similar physicochemical properties, these are in practice the most commonly used combinations:

A combination of RP and NP systems can be used for 2D separations of samples with two or more types of structural elements differing in lipophilic and polar properties:

The compatibility of mobile phases in the first and in the second dimension is very important in LCxLC. The transfer is usually feasible from an NP to a non-aqueous or high-organic RP system.

With polar sample compounds, hydrophilic interaction chromatography (HILIC) can be used in the second dimension, either on bare silica or less polar stationary phases, for example aminopropyl-, cyano-, diol-, or carbamoyl- derivatized silica (TSK gel amide) columns, or specific bonded stationary phases, such as poly(2-sulphoethyl) aspartamide, or a sulfobetaine zwitterionic ZIC-HILIC column, which allow the use of mobile phases containing up to 70% water, even though mobile phase more rich in mobile phases are used more frequently, as the retention of polar compounds in HILIC strongly decreases with increasing concentration of water in the mobile phase.

LC×LC combinations of RPLC and ion-exchange (IEX) LC, with either salt concentration or pH gradients, are often used for separations of ionic compounds, acids or bases.

Mobile phases used in RPLC×RPLC and RPLC×IEC separation systems are usually fully miscible and have similar physicochemical properties. However, mobile phases with great differences in viscosities (such as acetonitrile–water and methanol–water) should be avoided, otherwise flow instabilities may occur, resulting in considerable broadening or distortion of the peak shape of compounds separated in the second dimension.

and as a result, peaks are broadened in the second dimension separation.

RPLC×RPLC systems have been applied for the analysis of complex food, natural extracts, pharmaceutical and environmental samples.

The retention in IEC is controlled principally by the solute charge, so that the IEX separation mechanism differs from the SEC and RPLC. However, neither RP×IEX nor SEC×IEX  systems are fully orthogonal, presumably because of hydrophobic interactions with the non-polar moieties in the ion exchange stationary phases.

SEC is often combined with NP or RP for 2D separations of synthetic polymers and biopolymers to provide separations based on the molar mass distribution (MMD) in one dimension and on the polarity (or lipophility) of the end groups in the other.

2D separations of polymers often combine size-exclusion chromatography (SEC) for the separation according to the distribution of molar masses in one dimension and normal-phase, aqueous–organic or non-aqueous RPLC systems (depending on the polarity of the sample) in the other dimension under "near-critical" conditions.

SEC×NPLC has been applied mostly to the separation and characterization of synthetic polymers, copolymers or polymer blends that are soluble in organic solvents.

How to evaluate the separation selectivity

There are several ways to evaluate the separation selectivity. The easiest way is visual evaluation of how the peak pairs are scattered on the plot.  It is also possible to calculate the normalized retention times (or retention factors) for the target analytes in both columns, determining the correlations between the values obtained for both columns. It should be noted that the correlation coefficients should be always evaluated together with the fraction of the 2D-separation space, which is occupied by chromatographic peaks.