During introduction of the sample the temperature of the column oven is low, some 15oC below the normal boiling point of the solvent. This means that, as in the on-column injection of a standard volume, the sample is introduced in the liquid state. Discrimination or degradation is hence absent because the sample is directly introduced from the syringe into the column system without an intermediate evaporation step. It is evident that the retention gap, in order to accommodate the entire sample volume, should be sufficiently long. As a rough rule of the thumb: every microliter of sample results in an increase of the zone length of the wetted zone of roughly 20 centimetres. This means that for a 100 µl injection a retention gap of at least 20 meters is required. As the solvent plug may move along the retention gap, a safety margin of some 5 meters has to be added to this length. The use of such a long retention gap not only makes the column system expensive, it also renders evaporation very slow. Due to the long retention gap the column system has a serious flow resistance. This means that the gas flow rate through the system is low and, hence, evaporation of the solvent is slow. A second disadvantage of the on-column method for large volume injection is that in the simple set-up described above the entire volume of solvent has to be discharged from the system via the detector. Many of the more sensitive and/or selective GC detectors such as the nitrogen phosphorous detector, the flame photometric detector, electron capture detector and the mass spectrometer, however, do not tolerate the introduction of large volumes of solvent. 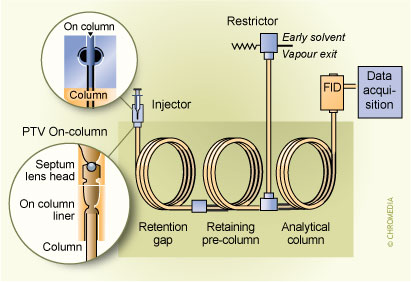 The ESVE is opened during solvent evaporation and is closed when solvent evaporation has reached completion. An advantage of the use of an ESVE is that solvent vapours no longer have to be discharged via the detector. In this way the detector is protected from large volumes of solvent vapour. Moreover, if an ESVE is used, the back pressure provided by the column system is significantly reduced, which results in a significantly higher column flow at a given inlet pressure. Evaporation of the sample solvent is hence faster. Apart from these advantages the use of an early solvent vapour exit also has several disadvantages, these include more expensive instrumentation and the greater complexity of the system.

Did you ever try to explain separation to your employees or students? Well, try no more: Lee Polite did it for you in a way which is hard to beat. We will open up one example of his whiteboard class. Click this link to watch the video. To see more, you can register here. Students and teachers can access free for one month.

The links in the center column lead to hundreds of chapters with text, video presentations, visualisations and animations. The chapters on Analytical Chemistry 2.1 (David Harvey), as well as basics LC, GC (Harold McNair, Lee Polite and other experts) and spectroscopy chapters are on the level of colleges, laboratory schools and universities, all 'deeper' clicks lead you to more advanced knowledge on analytical techniques with all the details for in-depth understanding for professional users.
Chromedia is used globally by numerous colleges, universities and industries, our authors are ranked as the finest teachers in the world. So go ahead and discover Chromedia by getting a 30 days subscription, which is free for students and teachers. Chromedia functionalities work best on the Chrome browser.