The split injector is the most universal and most widely used injector in combination with capillary columns. It is derived from the direct injector and hence is also based on rapid evaporation. 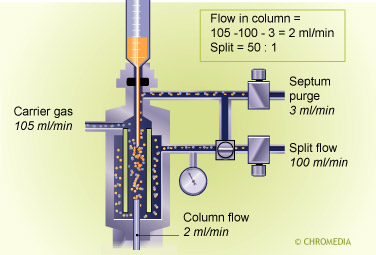 The flow ratio between these two portions is called the split ratio. In general the split ratio is selected based on the sample capacity of the column. With a very narrow- bore thin-film column, a small amount is introduced on the column and a large amount is vented off (split ratio 1 : 100).

The split injector is one of the most complex components of a capillary gas chromatograph, because the processes in the injector, such as evaporation of the sample, mixing with carrier gas, transport of the sample to the column and splitting the sample, are highly critical. These processes must all take place almost instantaneously, accurately, repeatably and without loss of efficiency.

Gascontrol of a split injector 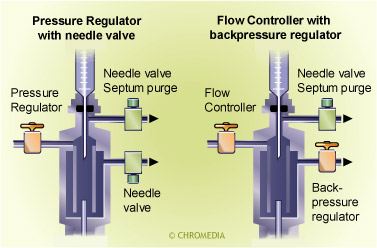 The most important task of the splitter is to representatively split the sample. In practice this occurs at high split flow rates (50 - 250 mL/min) resulting in very high gas velocities through the liner. An average liner has a volume of 200 - 400 µL. As soon as the sample evaporates, it occupies a large part of the liner volume. With a small flow through the liner, the time needed to transfer the vapor to the column and the split line, would be much too long in relation to the required input band width of the capillary column.

The contribution of the injector to band broadening can cause insurmountable problems. A high flow in the liner is therefore favored. This means that the sample has to evaporate completely and almost instantaneously. If this does not occur, the vapor plug that is introduced onto the column will be long and possibly not continuous, resulting in extra peak broadening and/or split peaks. It is therefore essential to inject the sample as quickly as possible.

Another important feature of the injector is the heat capacity. Even if the temperature is sufficiently high, problems preventing efficient evaporation can arise. After injection, the sample will absorb heat for evaporation. This results in

cooling down of the liner. A large decrease in temperature could lead to condensation of heavier components.

In order to minimize problems, the internal diameter of the liner should be small. A diameter of 3 to 4 mm is acceptable. Generally, liners with these diameters will not give any problems with most samples. If problems arise with regard to the type and/or amount of sample, the heat capacity of the liner can be improved. This can be accomplished by filling the liner with glass wool or glass beads. A frit in commercially available liners has the same function. It improves evaporation, because the liquid sample is better dispersed, but also because the hot surface of the liner is considerably increased. An additional advantage of a packed or fritted liner is that dirt from the sample cannot enter the column. A drawback of such liners is the increased risk of degradation of thermally labile analytes. 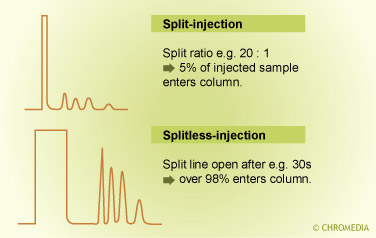