The nitrogen phosphorus detector (NPD) is a selective detector for nitrogen and phosphorus-containing compounds. Its detection principle is not fully understood but appears to be based on the electronic conductivity of a flame in presence of an alkali metal salt and changes therein caused by nitrogen or phosphorus in the compounds entering the detector. 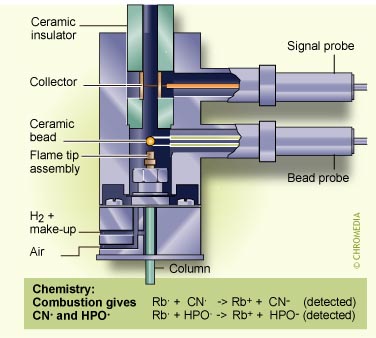 Detector gases and gas flow: The NPD uses both hydrogen and air, but in much smaller quantities than the FID. The small (3 - 5 mL/min) hydrogen flow is controlled by a mass flow controller, since needle valves are not accurate enough in this flow range. Typical air flow is 50 mL/min.

The NPD is essentially a modified FID. While the FID uses a polarization electrode, the NPD is equipped with a special bead/polarization assembly.  The NPD is electronically similar to the FID, with a cylindrical anode at a positive potential with respect to the jet and bead. In contrast to the FID the NPD does not require a separate make up flow although this may be provided in some instruments.