Abstract
ICP-MS is widely used for elemental detection in combination with various methods for separation, including GC, HPLC, CE and ion chromatography. Detection limits are extremely low, in the nanogram per liter range.

Numerous applications of speciation analysis have been reported, mainly in the field of biological systems, food analysis and environmental chemistry.
The mass spectrum presents the single charged nuclides of elements present in the inductively coupled plasma discharge. The signal intensities correspond with the element concentrations in the sample solution.

Analytical characteristics and applications of ICP-MS in speciation analysis

ICP-MS is widely used for elemental detection in combination with various methods for separation, including GC, HPLC, CE and ion chromatography. Detection limits are extremely low, in the nanogram per liter range.

Numerous applications of speciation analysis have been reported, mainly in the field of biological systems, food analysis and environmental chemistry. References to publications and information on species certified reference materials are found at the website of the European Virtual Institute for Speciation Analysis (EVISA): http://www.speciation.net/

Upon heating to 5000 K in the plasma most elements are present as single-charged ions (+1) which can be transferred to a mass spectrometer. The inorganic mass spectrum shows the intensities of nuclides and a few poly atomic species in the m/z range up to about 300. The intensities correspond to the concentrations of the elements in the sample solution.

Molecular information is lost in atomic spectroscopy detection methods because the sample must be heated to a temperature that is high enough to generate atoms and/or ions of the elements of interest. However, the combination of both organic and inorganic mass spectrometry coupled to separation techniques can offer full analytical characterization of all species.

Generation of ions in the plasma

The degree of ionization, α, varies from 100% for alkali and alkali earth elements to about 30% for elements with a high ionization energy (e.g. As and Se).

where ne is the electron density, me is the electron mass, Te is the electron temperature, h is the Planck constant, Za and Zi the partition function for the atom and ion, respectively and k is the Boltzmann constant. The ICP is an excellent source for the formation of single-charged ions

ICP-MS instrument: The ions formed in the plasma are extracted via a conical water-cooled sampler into the first vacuum stage where a pressure of ~100 Pa is maintained and then pass through the skimmer placed a few cm behind the sampler. Ion lenses focus the ion beam in the high vacuum (~10-3 Pa) provided by a turbomolecular pump. The detector measures the ion intensities. 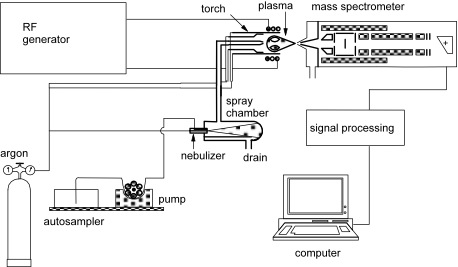 The ICP-MS instrument consists of the following components:

More information on the inductively coupled plasma is found in the section on ICP-OES.

The mass spectrometers used in ICP-MS are basically the same as used in GC/MS and LC/MS.

Isotopes: Nuclides having the same atomic number but different mass number are called isotopic nuclides or isotopes. Isotopes have the same number of protons and electrons, but differ in the number of neutrons present in the nucleus. The natural abundance of a stable isotope is the percentage of occurrence (between parentheses).

We prefer to measure the intensities of selected isotopes with high(est) abundances unless interferences occur at a specific m/z. 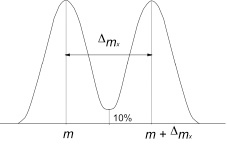 Separation of As from ArCl 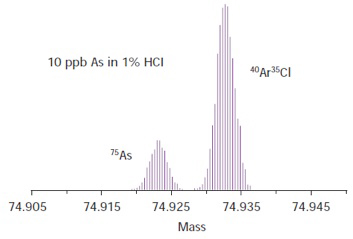 As an alternative to high resolution ICP-MS quadrupole-based instruments can be used in combination with collision/reaction cell technology to remove spectral interferences. The cell consists of a multipole (quadrupole, hexapole or octapole). A collision/reaction gas, e.g. hydrogen or helium is used to convert interfering polyatomic ions into non-interfering species or to convert the analyte to another ion which is not interfered in the mass spectrum.