A (beta-ray) radio active source which can ionize the carrier gas is located in the detector. A current is produced between two electrodes in the detector supplied with a potential difference and this is monitored as a continuous background current. When there are electro-negative components present in the carrier gas, the background current is reduced because these components capture electrons.

dynamic range of the ECD is often limited.

Actually, the mechanism of operation of the ECD is slightly more complex. The electrons emitted by the radioactive foil move too fast to be captured by the analyte molecules. They have to be slowed down. This can be achieved by introducing an inert gas into the ECD cell that collides with the rapid electrons and in that way slowing them down. For this reason some percentage of methane (5%) is added to the make-up gas argon (the most sensitive gas for an ECD regarding its ionizing capability). Methane reduces the electron energy by collision without ionizing the methane and avoids interference effects such as component ionization.

Today, nitrogen (cheaper and universal) is often used as make-up gas for an ECD instead of the more specific argon/methane. If helium is preferred as carrier gas for the column, simply using a make-up gas such as nitrogen or argon/methane will generate the expected detector sensitivity. In this particular case the function of the make-up gas is not to provide more gas but to improve the detector ionisation yield. In other words: make-up gas does not play a role in the chromatographic process in the column. It is only added the moment the carrier gas leaves the column. In this way the separaion can be performed under optimum carrier gas conditions while simultaneously the detector will generate an optimum signal-to-noise ratio. 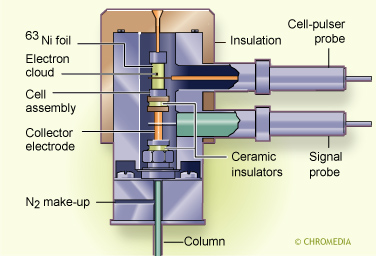