Abstract Chromatography is an excellent and extremely powerful separation technique. It is fast, simple, sensitive and usually requires little sample.

Chromatography is carried out to separate an often complex sample mixture into its individual components and to obtain information in terms of:

Chromatography is widely used in all kinds of applications area's, such as medical, environmental, food analysis, pharmaceutical, toxicology, quality testing and many more. Chromatography is becoming more and more refined and improved every day.

Chromatography is a dynamic separation process based on differences in the rates of migration of different compounds through a column containing an immobilised phase. Migration is induced by a continuous flow of the mobile phase through the column.

Separation techniques play an important role in modern analytical chemistry. Most chemical analyses involve the separation of complex samples. These mixtures contain at least one component in which we can be interested for different reasons e.g.:

The components we wish to analyze (called analytes) are usually accompanied by other components that are generally present in much larger amounts. These other components are called the sample matrix. In general the nature and composition of this matrix is not of direct interest, but we have to take matrix effect into account. We speak of matrix effects if compounds present in the matrix affect sample pretreatment, separation or detection of the analytes.

Chromatography is often used to separate analytes from the matrix and to determine each analyte separately. Often the sample has to be treated - sample preparation - before we can start the chromatographic separation. Chromatography enables both qualitative (detection and identification) and quantitative analysis.

A number of separation techniques are available. The two most commonly used methods in modern chromatography are gas chromatography (GC) and high performance liquid chromatography (HPLC). HPLC has a number of different separation modes, of which the basics are described here. These techniques compliment each other with regard to their respective fields of application, even though there is some degree of overlap. One can say that

GC is the more powerful technique with regard to separating very complex mixtures, providing that they are thermally stable, whereas HPLC is more versatile with respect to sample type and selectivity.

Gas chromatographic separation is based on:

Gas chromatography can be used for the separation of volatile organic compounds. However, numerous solutes that should be determined in the bio-analytical or environmental field are not suitable for direct GC determination because of there limited stability at the elevated temperatures used during GC separations.

Scheme of a universal GC 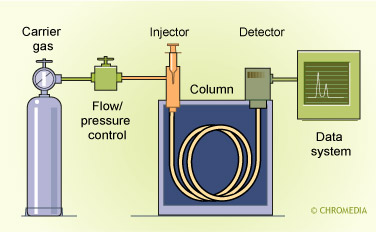 GC can be performed nowadays with the traditional techniques like the various modes of extraction, but also multi-dimensional approaches that can be performed either at-line or on-line are widely available. Especially the use of ‘pre-columns’ is gaining in popularity. 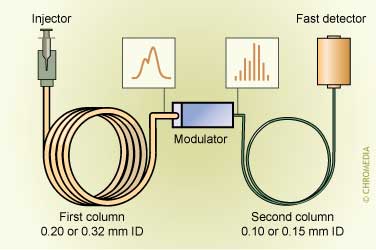 The popularity of GC in environmental analysis is due to fact that GC, in principle, is a more efficient a faster technique – compared with LC – and can be combined easily with a number of selective and sensitive detectors. Moreover, the analytes in environmental analysis are still relatively non-polar compared with the drugs that should be determined in biological samples. 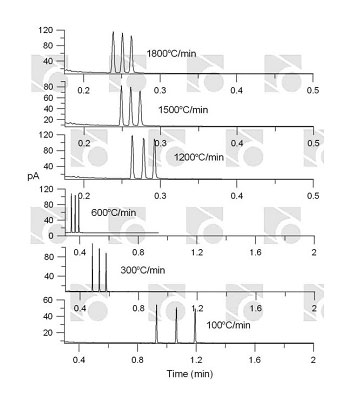 Stationary phases in GC can be divided based on their polarity or selectivity with respect to one or more physico-chemical properties of the analyte molecules such as molecular mass or molecular shape, boiling point or the presence of certain functional groups (table herunder).

The separation on the non-polar sorbents like SE-30, OV-1 and Apiezon L, a branched alkane polymer with a melting point of 430C, is primarily based on molecular size and shape. In general the elution order corresponds to the molecular mass of the compounds. In particular for neutral and weakly acidic compounds these phases are suitable.

These phases are in particularly useful for the determination of strong basic compounds. Another group of polar stationary phases are the poly(cyanopro-pylphenyldimethyl) siloxanes. These moderately polar sorbents are used for the separation of compounds containing several hydroxyl groups (e.g. steroids).

In summary it can be stated by using only a limited number of sorbents, most separations can be performed in case temperature programming is applied:

As mentioned before different type of columns are used for GC separations: 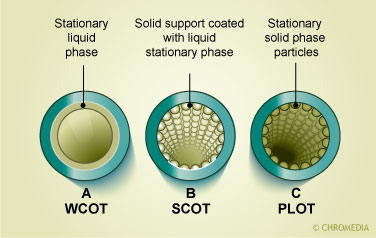 In the picture a packed column with an internal diameter of 2-4 mm and a tubular construction of either glass or stainless steel can be seen. The column is packed with particles which either act as the retarding stationary phase or are coated with a thin film of organic material which acts as the stationary phase. The other pictures depict open tubular columns. These columns have a narrow internal diameter between 0.17-0.53 mm. There are two major types of capillary columns: the porous layer open tubular (PLOT) columns in which the inner surface of the column has an embedded layer that contains the stationary phase and the wall coated open tubular (WCOT) in which a thin film of organic stationary phase is bonded directly onto the inner surface of the column. A

comparison between packed and capillary columns is given in the table. 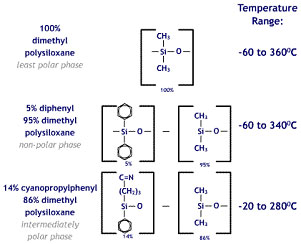 The chemical structure of some of the stationary phases described in this table is pictured here. The non-polar phases are more stable and chromatographically robust than the polar phases which tend to have a lower temperature tolerance and are more susceptible to oxidative damage if air is introduced into the column.

Chromatography is a dynamic separation process based on differences in the rates of migration of different compounds through a column containing an immobilised phase. Migration is induced by a continuous flow of the mobile phase through the column.