Until the nineteen-sixties, the separation of 'non volatile analytes' was often performed by flash, paper, and thin-layer

chromatography. These techniques were:

HPLC has evolved into an indispensable tool in many analytical laboratories and is applied to diverse analytical problems.

Given the advantages and its high separation potential, RPLC has become (with the exception of large molecules) the separation mode of choice for the often simultaneous separation of nonpolar, polar, and ionic analytes. Not surprisingly, therefore, RPLC is used in a large and still growing number of application fields. It has become an indispensable analytical technique in

RPLC is the dominant analytical and preparative technique in many other scientific and industrial settings as well. The technique is still developing, in spite of its 40+ years of use, and is a lively subject of academic and industrial research directed towards the development of new columns, instrumentation, and theory.

In the early days of

Given this difficulty, the discovery of chemically bonded phases (

CBP) approximately four decades ago was a historic breakthrough for chromatography. With the advent of CBP’s, different functionalities ranging from non polar to ionic could be covalently bonded or physisorbed onto a substrate. This, in turn, allowed the development of new separation modes, including ion exchange, affinity, and size exclusion chromatography. The following scheme provides an overview of the most important separation modes in LC. 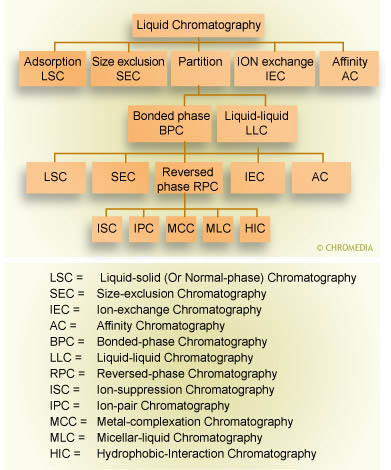 Reverse Phase Liquid Chromatography (RPLC) is an extremely important subtechnique of HPLC employing an important subset of Bonded Phase Chromatography. The technique is easily recognizable since, in comparison to normal or straight phase techniques, it reverses the polarity of the original adsorbent as well as the polarity of the mobile phase compared to the existing

of RPLC. The following table summarizes a number of the properties of straight and reversed phase chromatography in order to highlight the differences.

As with many other chromatographic techniques, RPLC stationary phases must have sufficient surface area for the different interactions between both the mobile phase and the sample components in order to achieve separation. Furthermore, the sample must be sufficiently soluble in the aqueous-organic mobile phases.

1. Given the variety of available stationary phase ligands, RPLC can use hydrophobic, polar, ionic, and other interactions to optimize separations. This allows the simultaneous separation of non-polar, polar, or ionic components. In fact,

RPLC can separate nearly all molecules with the exception of large molecules. Conventional hydrophobic, ion-pair (IPC), ion suppression(ISC) and hydrophobic interaction (HIC) chromatography are well-known examples of RPLC separation modes. These separation modes will be discussed in detail in the separate circles around the topic “Separation modes“.

2. A large number of high quality and efficient RPLC stationary phases are

available. Combined with the wide spectrum of potential mobile phase mixtures, this offers a range of selectivity adequate to solve nearly any separation problem.

3. Water frequently forms an inexpensive, non-toxic and major part of the mobile phase. In addition, many samples to be analyzed are soluble in aqueous-organic mixtures.

4. Standard RPLC stationary phases offer acceptable chemical and thermal stability. These stationary phases can typically tolerate mobile phase pH’s from 2.5 to 7.5 and column temperatures up to 50º C, which is sufficient for a great number of separations. Recently, other RPLC phases have become available which can tolerate pH’s in the range of 2 to 12 and can handle temperatures up to 90º C and beyond. These recent developments have expanded the working range of RPLC substantially.

5. Although RPLC is mostly applied as an analytical technique, it is also used in laboratory and industrial scale preparative HPLC and for the determination of physical-chemical constants.

7. Retention and selectivity mechanisms are readily understood and a number of retention models have been developed to support the optimisation of separations. In addition, a number of software programs have become available to support the analyst in fast and automated method development.

Given these advantages and its high separation potential, RPLC has become (with the exception of large molecules) the separation mode of choice for the often simultaneous separation of nonpolar, polar, and ionic analytes. Not surprisingly, therefore, RPLC is used in a large and still growing number of application fields. It has become an indispensable analytical technique in polymer chemistry, biochemistry, food and pharmaceutical chemistry, life sciences and clinical and forensic chemistry, just to mention a few. RPLC is the dominant analytical and preparative technique in many other scientific and industrial settings as well. The technique is still developing, in spite of its 40+ years of use, and is a lively subject of academic and industrial research directed towards the development of new columns, instrumentation, and theory.

Nonpolar modified stationary phases are by far the most important column packings in RPLC. In the majority of such phases, alkanes or other non polar functional ligands are

covalently bonded to a support material or substrate. The length of the carbon chains bonded to a substrate is typically somewhere between C1 and C22. Among these stationary phases, octyl (C-8) and octadecyl (C-18) modified silicas are well-known and are often used as standard column packings.

Columns and stationary phases for RPLC must provide:

Substrate types
RPLC stationary phases can be manufactured from different susbtrate types, for example: inorganic oxides such as silica, alumina, zirconia; or organic polymers like styrene-divinylbenzene, methacrylates and graphitized carbons.

In general, substrates for RPLC phases should meet the following major requirements:

Silica meets nearly all of these requirements and, in fact, is a dream substrate for the synthesis of RPLC phases. Silica falls short only in terms of chemical stability since it begins to dissolve at a pH of approximately 7.5 . New synthesis and modification techniques, however, have resulted in greatly improved silica substrates and stationary phases thereof showing

Silica substrates can be manufactured by either silgel or solgel procedures. The choice influences the final substrate and stationary phase’s surface area as well as its chemical stability. The chromatographic properties of the phase are determined by the chemical structure of the surface and by its Specific Surface Area (SSA), which is inversely proportional to the pore diameter of the particles. Hence:

The illustration hereunder shows the schematic structure of a silica

substrate. In this figure the different structural elements present on a silica surface are presented: 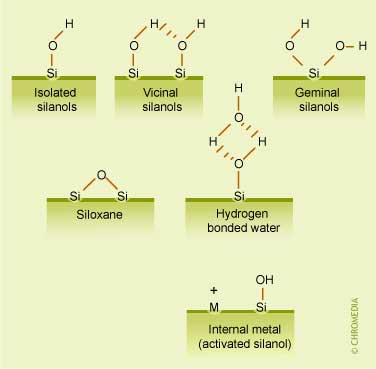 Silica can be produced with many different morphologies, porosities and surface areas. For example, silica can be manufactured:

Below are some typical ranges for the various properties of the silica substrates used for HPLC: 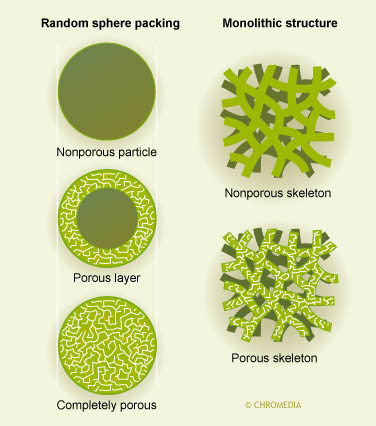 Not surprisingly, therefore, the majority of HPLC stationary phases are produced from silica substrates and a wide variety of phases bonded with various non- polar, polar and ionic functional groups are marketed. Among these CBP’s, stationary phases for RPLC are an important group of packing materials.